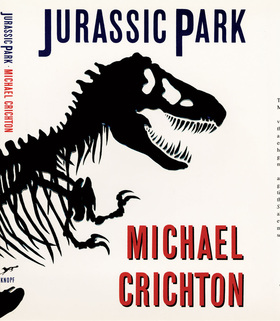 Amazon Summary:
An astonishing technique for recovering and cloning dinosaur DNA has been discovered. Now humankind’s most thrilling fantasies have come true. Creatures extinct for eons roam Jurassic Park with their awesome presence and profound mystery, and all the world can visit them—for a price.

In Jurassic Park, Michael Crichton taps all his mesmerizing talent and scientific brilliance to create his most electrifying technothriller. 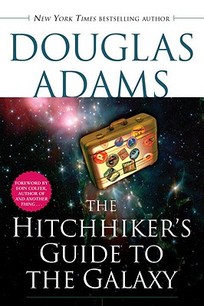 Amazon Summary:
Seconds before the Earth is demolished to make way for a galactic freeway, Arthur Dent is plucked off the planet by his friend Ford Prefect, a researcher for the revised edition of The Hitchhiker's Guide to the Galaxy who, for the last fifteen years, has been posing as an out-of-work actor.
Together this dynamic pair begin a journey through space aided by quotes from The Hitchhiker's Guide ("A towel is about the most massively useful thing an interstellar hitchhiker can have") and a galaxy-full of fellow travelers: Zaphod Beeblebrox--the two-headed, three-armed ex-hippie and totally out-to-lunch president of the galaxy; Trillian, Zaphod's girlfriend (formally Tricia McMillan), whom Arthur tried to pick up at a cocktail party once upon a time zone; Marvin, a paranoid, brilliant, and chronically depressed robot; Veet Voojagig, a former graduate student who is obsessed with the disappearance of all the ballpoint pens he bought over the years.
Where are these pens? Why are we born? Why do we die? Why do we spend so much time between wearing digital watches? For all the answers stick your thumb to the stars. And don't forget to bring a towel! 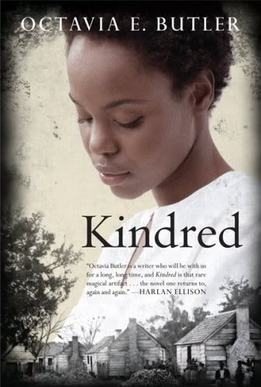 Amazon Summary:
Dana, a modern black woman, is celebrating her twenty-sixth birthday with her new husband when she is snatched abruptly from her home in California and transported to the antebellum South. Rufus, the white son of a plantation owner, is drowning, and Dana has been summoned to save him. Dana is drawn back repeatedly through time to the slave quarters, and each time the stay grows longer, more arduous, and more dangerous until it is uncertain whether or not Dana's life will end, long before it has a chance to begin.

Amazon Summary: In order to develop a secure defense against a hostile alien race's next attack, government agencies breed child geniuses and train them as soldiers. A brilliant young boy, Andrew "Ender" Wiggin lives with his kind but distant parents, his sadistic brother Peter, and the person he loves more than anyone else, his sister Valentine. Peter and Valentine were candidates for the soldier-training program but didn't make the cut--young Ender is the Wiggin drafted to the orbiting Battle School for rigorous military training.

Ender's skills make him a leader in school and respected in the Battle Room, where children play at mock battles in zero gravity. Yet growing up in an artificial community of young soldiers, Ender suffers greatly from isolation, rivalry from his peers, pressure from the adult teachers, and an unsettling fear of the alien invaders. His psychological battles include loneliness, fear that he is becoming like the cruel brother he remembers, and fanning the flames of devotion to his beloved sister.

Is Ender the general Earth needs? But Ender is not the only result of the genetic experiments. The war with the Buggers has been raging for a hundred years, and the quest for the perfect general has been underway for almost as long. Ender's two older siblings are every bit as unusual as he is, but in very different ways. Between the three of them lie the abilities to remake a world. If the world survives, that is.

The Martian, by Andy Weir

​Six days ago, astronaut Mark Watney became one of the first people to walk on Mars.

Now, he's sure he'll be the first person to die there.

After a dust storm nearly kills him and forces his crew to evacuate while thinking him dead, Mark finds himself stranded and completely alone with no way to even signal Earth that he’s alive—and even if he could get word out, his supplies would be gone long before a rescue could arrive.

Chances are, though, he won't have time to starve to death. The damaged machinery, unforgiving environment, or plain-old "human error" are much more likely to kill him first.

But Mark isn't ready to give up yet. Drawing on his ingenuity, his engineering skills—and a relentless, dogged refusal to quit—he steadfastly confronts one seemingly insurmountable obstacle after the next. Will his resourcefulness be enough to overcome the impossible odds against him?

Yes, this was made into a movie starring Matt Damon!

​The House of the Scorpion, by Nancy Farmer 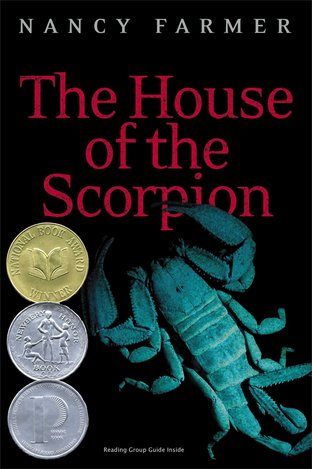 Amazon Summary: Fields of white opium poppies stretch away over the hills, and uniformed workers bend over the rows, harvesting the juice. This is the empire of Matteo Alacran, a feudal drug lord in the country of Opium, which lies between the United States and Aztlan, formerly Mexico. Field work, or any menial tasks, are done by "eejits," humans in whose brains computer chips have been installed to insure docility. Alacran, or El Patron, has lived 140 years with the help of transplants from a series of clones, a common practice among rich men in this world. The intelligence of clones is usually destroyed at birth, but Matt, the latest of Alacran's doubles, has been spared because he belongs to El Patron. He grows up in the family's mansion, alternately caged and despised as an animal and pampered and educated as El Patron's favorite. Gradually he realizes the fate that is in store for him, and with the help of Tam Lin, his bluff and kind Scottish bodyguard, he escapes to Aztlan. There he and other "lost children" are trapped in a more subtle kind of slavery before Matt can return to Opium to take his rightful place and transform his country. 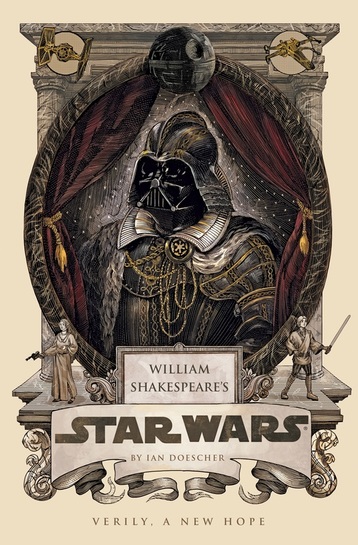 Amazon Summary: Return once more to a galaxy far, far away with this sublime retelling of George Lucas’s epic Star Wars in the style of the immortal Bard of Avon. The saga of a wise (Jedi) knight and an evil (Sith) lord, of a beautiful princess held captive and a young hero coming of age, Star Wars abounds with all the valor and villainy of Shakespeare’s greatest plays. ’Tis a tale told by fretful droids, full of faithful Wookiees and fearstome Stormtroopers, signifying...pretty much everything.

Reimagined in glorious iambic pentameter—and complete with twenty gorgeous Elizabethan illustrations--William Shakespeare’s Star Wars will astound and edify Rebels and Imperials alike. Zounds! This is the book you’re looking for. 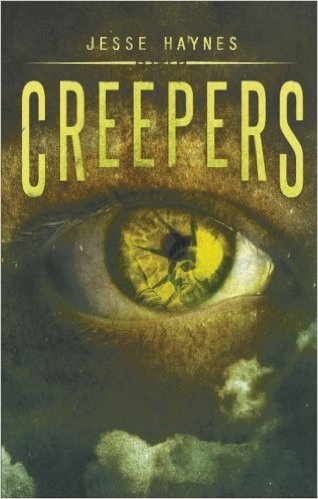 Amazon Summary: After an astronaut becomes host to an extraterrestrial virus in space and is transported back to earth in a vegetative state, the most advanced medical minds in the United States are perplexed as their patient undergoes a dramatic transformation. When the patient awakens and begins to savagely attack everyone in the hospital, the rapid spread of the virus commences. Only five years later, humans are almost nothing more than a distant memory. Instead the virus has transformed them into creepersmindless predators that savagely hunt and kill. In Jesse Hayness novel Creepers, join Brothers Drake and Jason Bennett, two of the last humans on Earth. The brothers fight for survival every day in their hometown of New York City, but creepers seem to lurk in every alley and hunt through the city streets by both day and night. When news of a potential survivor colony reaches the Bennett brothers, they decide to travel across the decimated United States. Join Jason and Drake as they face countless challenges that push them to the brink of sanity in their daily struggles while searching for the remnants of humanity and a way to beat the virus.

This book was written by a Tulsa native when he was in high school! He's currently a student at the University of Tulsa.